Destination Moon is a true collaboration between L’Epée 1839 and MB&F the base concept originated with L’Epée movement designer and sci-fi rocket fan Nicolas Bringuet, who came up with the idea for the movement’s distinctive vertical architecture. Driven by passion, Bringuet designed the movement over one long, largely sleep-free, weekend. L’Epée then contacted MB&F wondering if some type of spacecraft might be designed around the movement and the project blasted off. MB&F intern-designer Stefano Panterotto came up with the basic shape, however it initially looked too realistically rock – et-like and that something magical was missing. Paradoxically, the answer to adding magic was in removing the skin of the rocket so it both looked more technical − helped by the per – forated Meccano-like movement plates− and acted as a framework for the viewer’s imagination. The real magic of Destination Moon is space; not the space of the cosmos above our heads, but the largely empty space that is Destination Moon. If the body of the rocket was com – pletely covered, observers would see the rocket of some – body else’s youth, but because the rocket-themed desktop clock is in reality a largely empty, perforated frame, those viewing Destination Moon are each likely to see a slightly different spacecraft: the rocket of their own childhood rather than somebody else’s… Space isn’t empty; it’s filled by imagination. 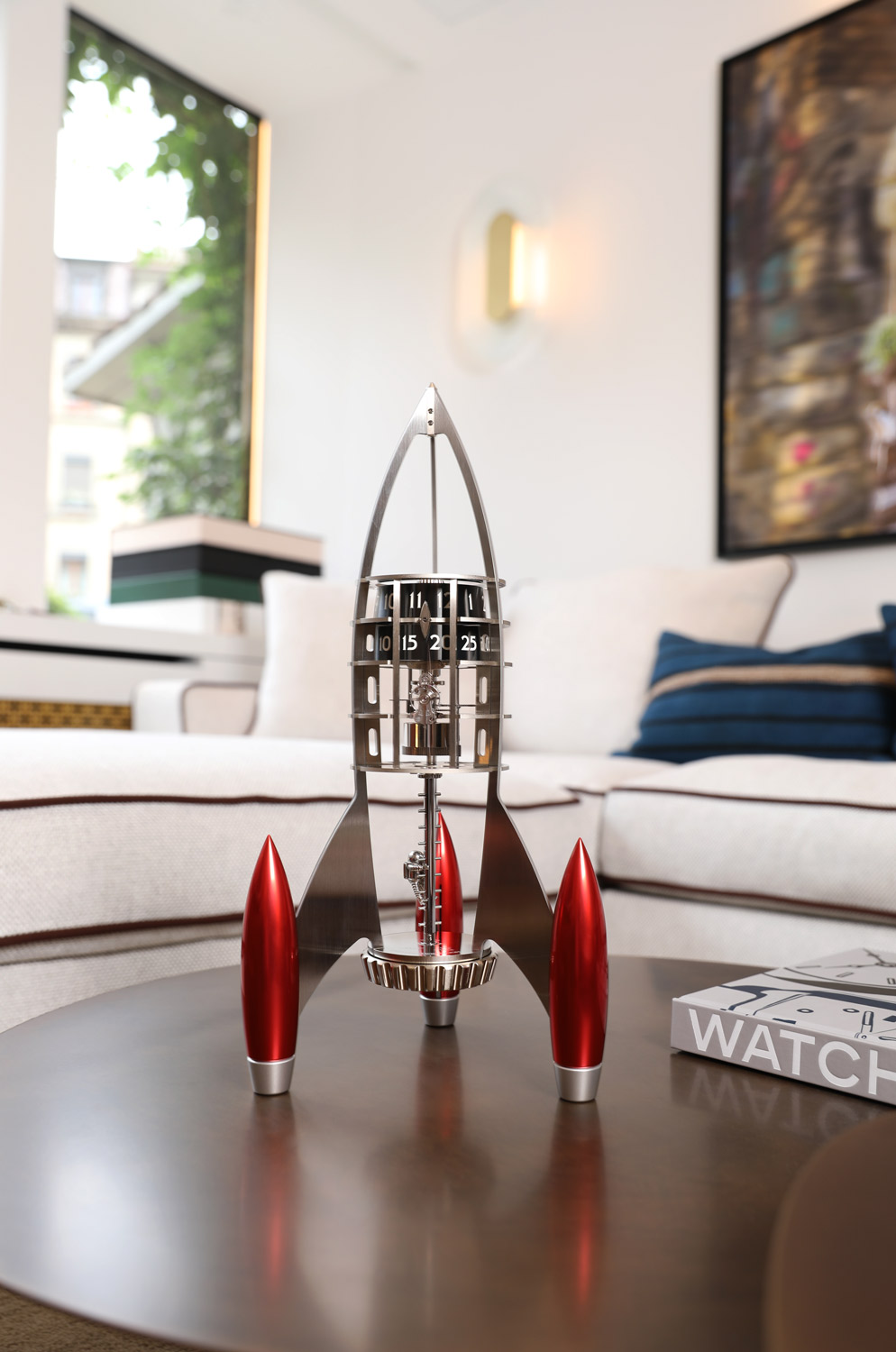 While designed by MB&F, Destination Moon was constructed by L’Epée 1839, Switzerland’s premier producer of high-end clocks. The concentric vertical construction of the eight-day movement was developed especially for Destination Moon, but it also draws strong parallels with MB&F’s recently launched Horological Machine No.7 Aquapod: while one is a spacecraft-inspired table clock and the other a jellyfish-in – spired aquatic wristwatch, both feature movements compris – ing concentric vertical architecture and both are powered from their base. Perhaps the crowning jewel of Destination Moon – its apogee if you will – is the small figure on the ladder at its base: Neil. Constructed of solid sterling silver with a stainless steel helmet and wearing a 1960s-style spacesuit, Neil brings a playful human element to the engineering of the Meccanostyle openwork of the spaceship and its clockwork. Neil magnetically attaches anywhere along Destination Moon’s boarding ladder. Whether he is embarking to take off for an adventure in space, or disembarking for an adventure on the moon’s surface is up to the individual viewer’s imagination.