Luminosity is at the heart of URWERK’s latest creation. Its name “Kryptonite” derives from the intense green light emitted from the hour markers. You have to slide the catch on the top of the case to reveal the mechanism of the UR-105 CT. It’s a wandering hour indication based on a new openwork carousel, which carries the four satellites, each bearing three numerals for the hours. The hours successively sweep past the minutes scale for an analogue and digital display of the time. A power-reserve indicator and digital seconds make up the rest of the information displayed on the dial. The digital seconds are remarkable in that they indicate tens of seconds. 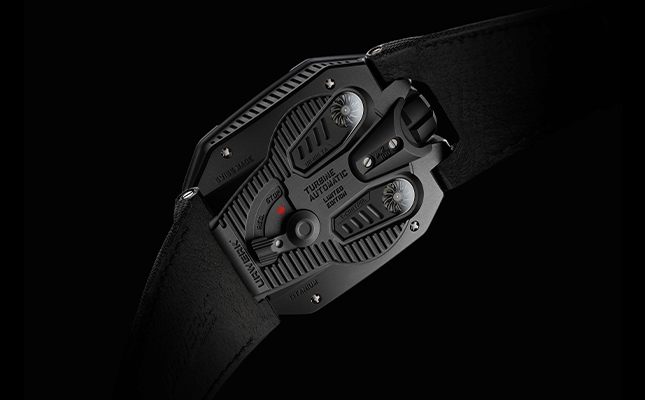 The mechanism was made using a photolithographic process, with each marker openworked to make it as light as possible. It thus weighs less than a tenth of a gram. Two pneumatic turbines on the back govern the selfwinding rate, which can be set with a lever. In the FULL position, the slightest movement of the wrist is harnessed to rewind the barrel springs. Turn the lever to STOP to disengage the selfwinding system and wind up the UR-105 using the crown.