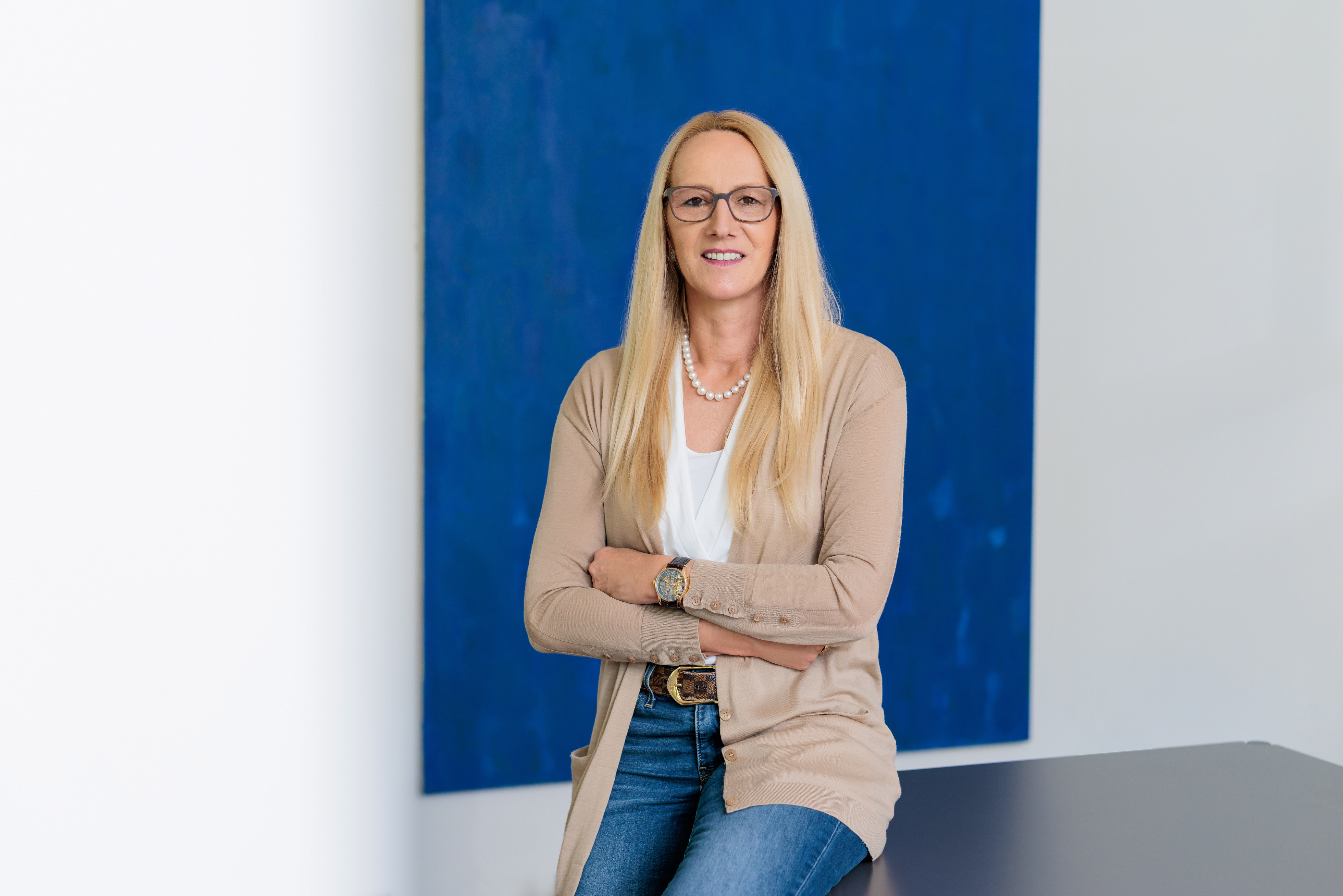 A place of origin is a realm that fulfils the need for identity, security, and individualism in life. In the 19th century, Moritz Grossmann found it in a small town in the Ore Mountains: Glashütte. In his atelier there, the exceptionally gifted pioneer developed technically outstanding watch models. More than 100 years later, watchmaker Christine Hutter discovered the heritage of Moritz Grossmann in Glashütte and established a new manufacture. Today, this is where ancestral craftsmanship is reinterpreted with modern technology. The beginning of a new era in the name of Moritz Grossmann: Schönstes deutsches Handwerk.

From the sketch to a fusion of the arts: A Moritz Grossmann watch is a work of art and the result of a concerted effort. Every single step is executed with maximum precision in their Glashütte manufacture. From the formulation of the underlying ideas and the construction of a prototype to the immaculate finishing processes, as well as the first and final assembly procedures. Each hand-crafted detail is the result of in-depth know-how. 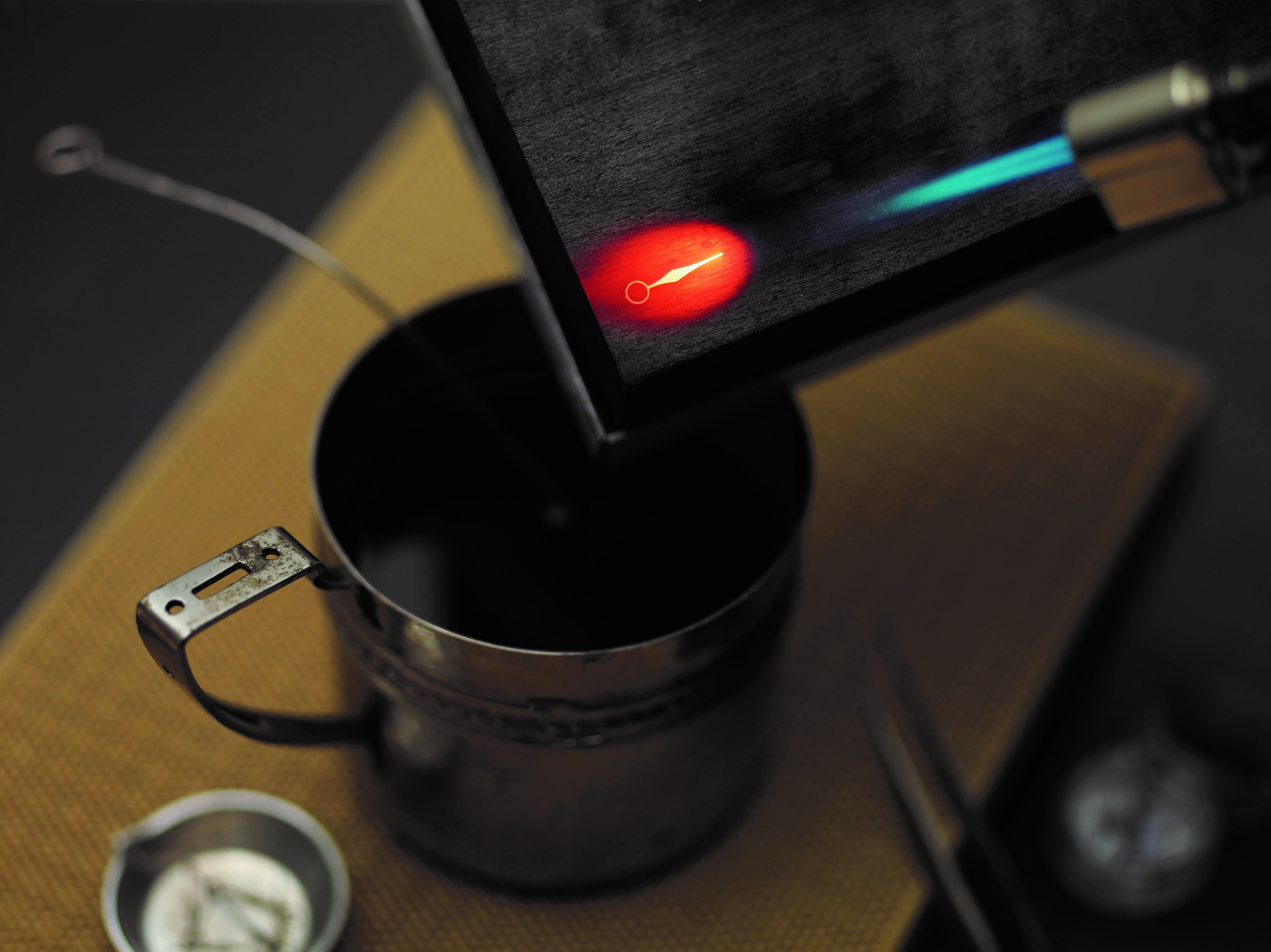 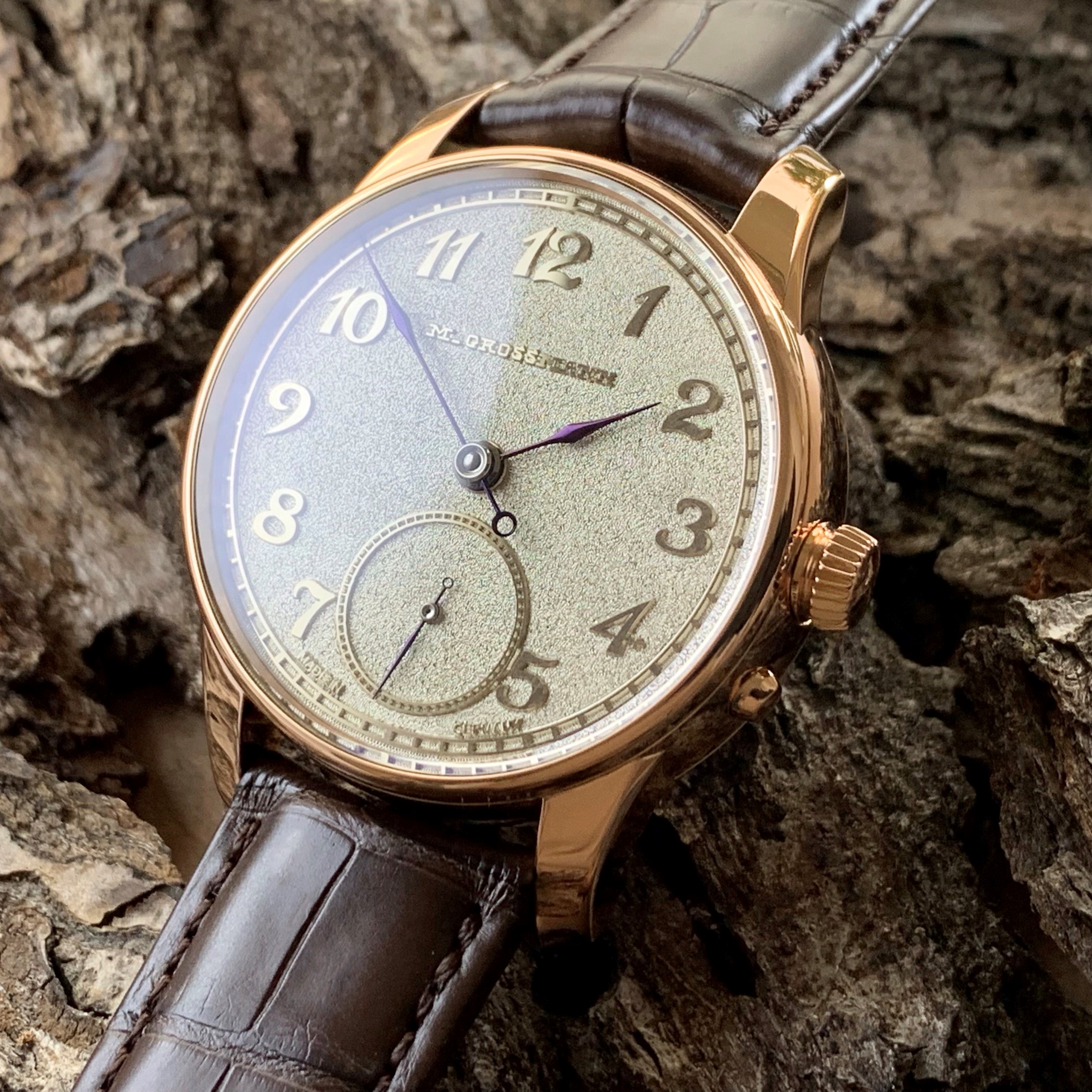 The precision of their timepieces lies in the hands of experts. In keeping with the concept of “manu factum”, everything is “made by hand” at Moritz Grossmann – from the smallest detail to the complete movement. The innovative spirit of their eponym comes alive in their ateliers. This is the point of departure for a collection that is rooted in traditional craftsmanship but totally committed to the present.

Some timepieces to
discover

The tourbillon crowns the BENU family. After all, the flying three-minute tourbillon with stop seconds is one of the most formidable challenges in horology. The complex choreography of mechanical precision can be admired through the sapphire-crystal back. It expresses technical virtuosity and stands for traditional craftsmanship. 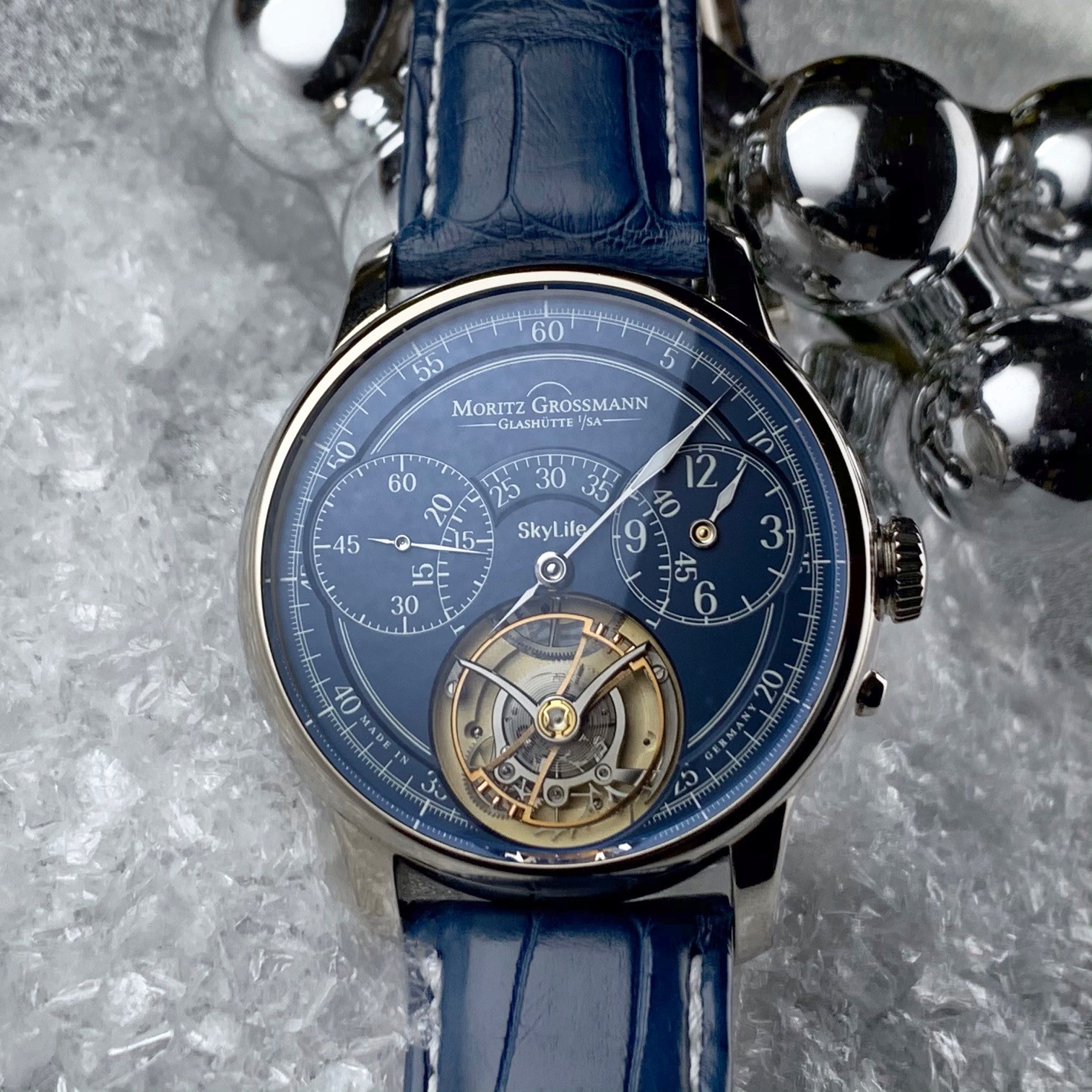 This new eight-piece limited edition of the Grossmann TOURBILLON also boasts hands made of 750/000 white gold. Shaped like an elongated rhombus and ending in a wafer-thin tip, the hands have the instrumental character that is the hallmark of the manufactory. Combined with the dark tone of the blue solid silver dial on which the hands rotate, the result is one of profound elegance.

Throughout millennia, researchers and inventors strived to build a perpetual motion machine, a device that would continue to move indefinitely once started. Without any external source of power, it was believed that the machine itself would generate an unlimited amount of energy. It was only with the formulation of the law of conservation of energy in the middle of the 19th century that physics quashed the principle of perpetual motion. Nevertheless, people’s fascination for the concept remained unbroken.
Of course, the HAMATIC does not purport to be perpetual motion machine – after all, the first self-winding watch from Moritz Grossmann draws its kinetic energy from an external source. A pendulum-style hammer weight skilfully uses the energy generated through the wearer’s movements to transfer it via the ratchet wheel to the mainspring in the barrel, meaning that an external energy source makes the dream of infinite motion come true. It’s therefore safe to say that the HAMATIC is one of the most beautiful and complex examples of would-be perpetual motion. 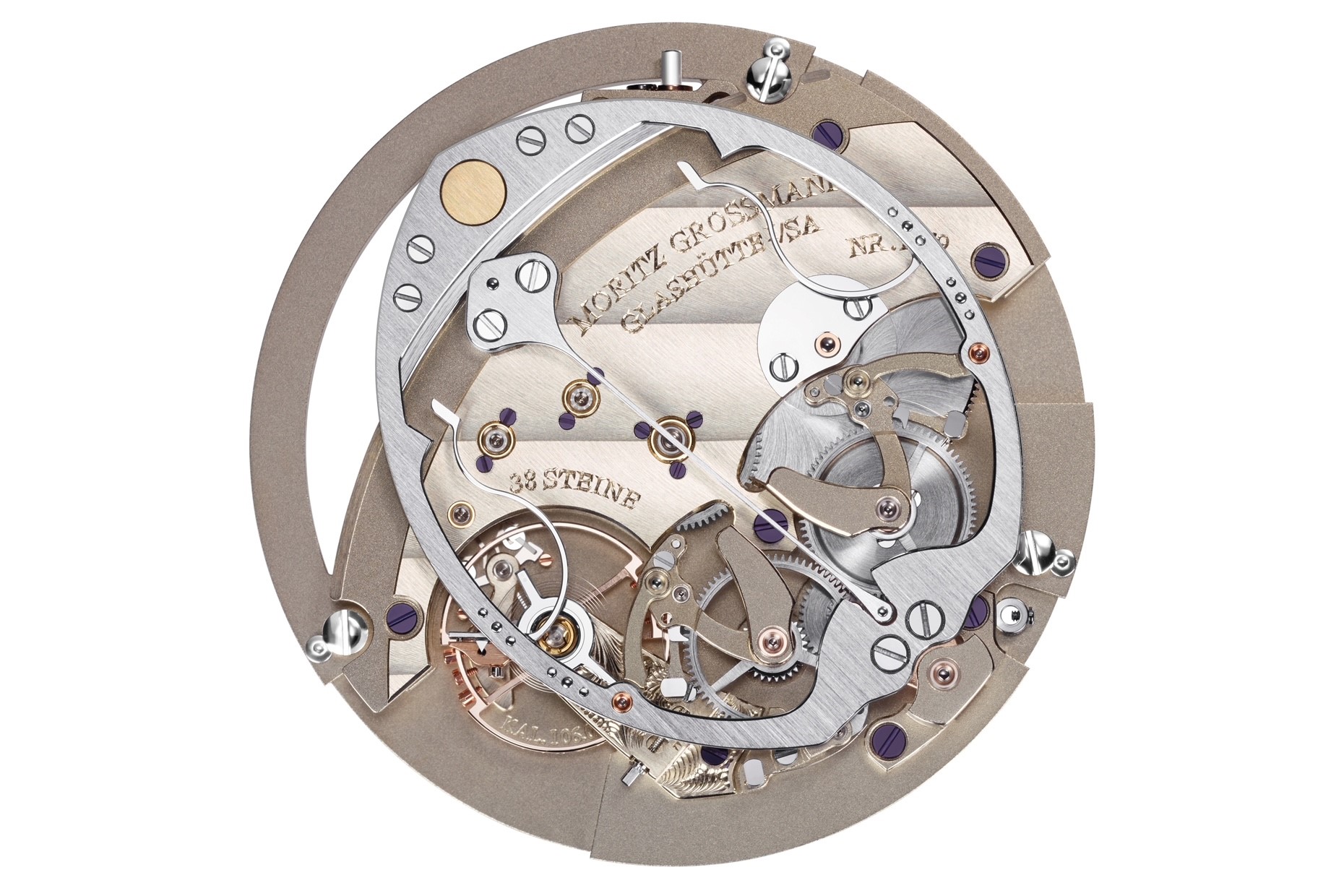 On 11 November 2022, the manufactory will present the perfect combination of aesthetics and mechanics in the form of the HAMATIC Vintage Cream. While the cream-coloured dial in vintage style is reminiscent of the historic watches made by Moritz Grossmann, the violet numerals and hands act as a link to the movement. Violet-annealed screws are just some of the elaborate decorations incorporated into the in-house manufactory calibre – a hallmark of Moritz Grossmann’s craftsmanship.

A historic engraving technique is being given a new lease of life to mark the manufactory’s anniversary on 11 November 2021. Finished using the eponymous tremblage engraving technique, the TREMBLAGE anniversary model elegantly combines vintage style with the finest mechanics. The timepiece is available in rose gold and stainless steel 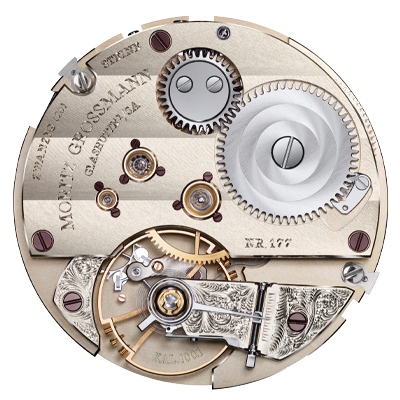 Christine Hutter, founder and CEO of the young manufacture, states: “The TREMBLAGE is yet another outstanding innovation in our BENU Heritage collection line. We have revived the historic engraving technique of tremblage in our anniversary model and are delighted to have an engraver with exceptionally long experience and an artistic sensibility to craft a unique work of art from each of our dials.

Numerous connoisseurs have suggested that the exquisite characteristics of the manufacture calibres should be showcased in a particularly exposed position. Thanks to the inventiveness of Grossmann’s engineers, this was consummately accomplished with the calibre 107.0 movement. Here, pure watchmaking artistry has gained a new presence. So far, highlights such as the Grossmann balance, the hand-engraved balance cock or the ratchet wheel with three-band snailing could only be admired through the display back. Now, with the development of the mirrored calibre, they can be shown on the dial side. This model presents the “back page” of the movement in an unusually large dial aperture that doubles as a prominent stage. 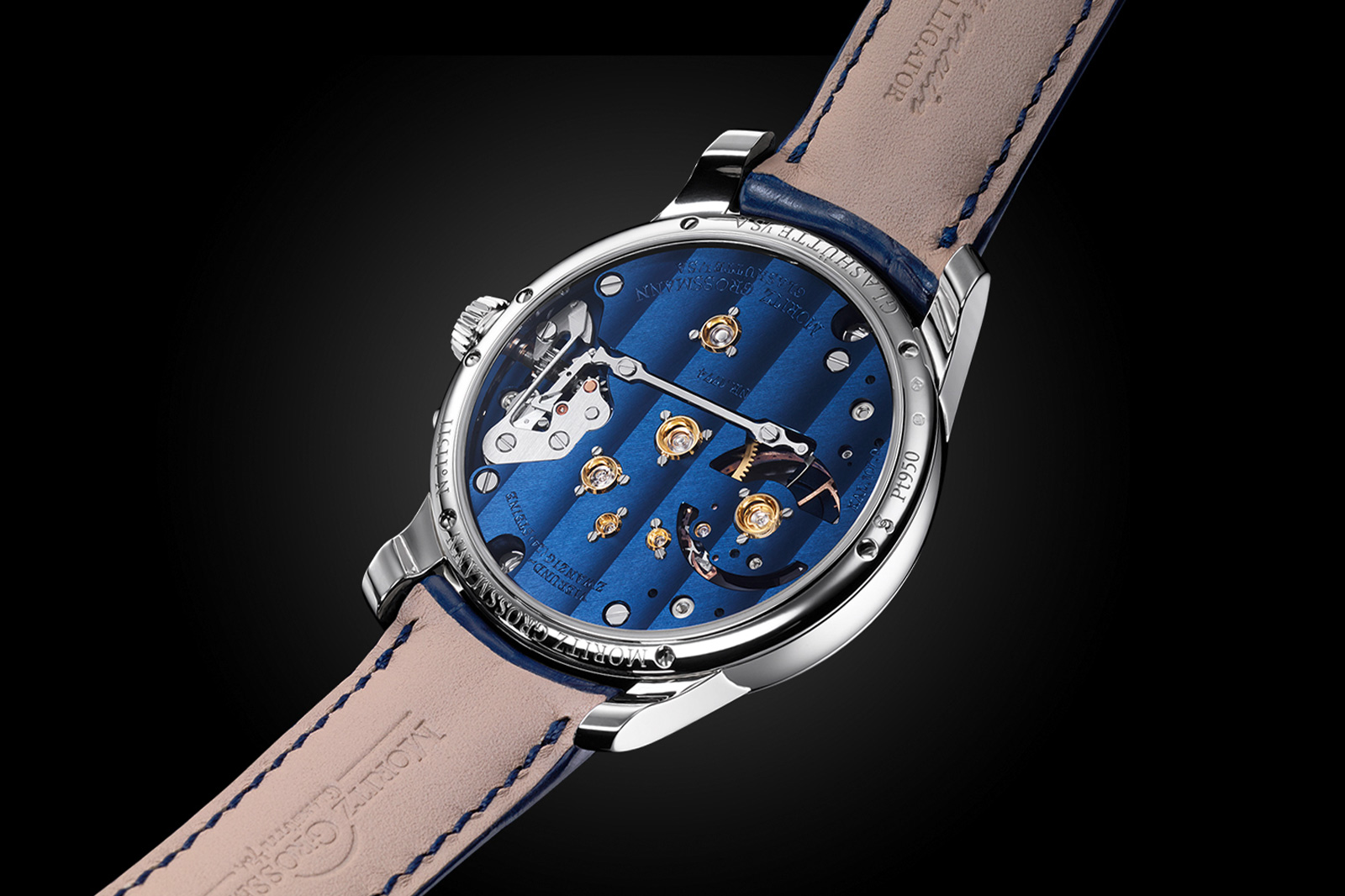 Celebrating its 13th anniversary on 11 November 2021, the Moritz Grossmann Manufacture has unveiled an exquisite version of the BACKPAGE. The prestigious watch brand is marking the occasion with this magnificent model, which brings the exceptional design of the “mirror-inverted” calibre 107.0 to life in an ensemble of deep blue, polished steel and gold elements. The timepiece is available in a platinum case and comes in a limited edition of 13 pieces worldwide.

Presenting the first model of the newly founded independent Glashütte watch manufactory Moritz Grossmann in 2010, Christine Hutter saw a 125-year-old dream come true. The dream of manufacturing mechanical watches to the highest standards of craftsmanship in the spirit of the visionary and watchmaking genius Moritz Grossmann in Glashütte again. 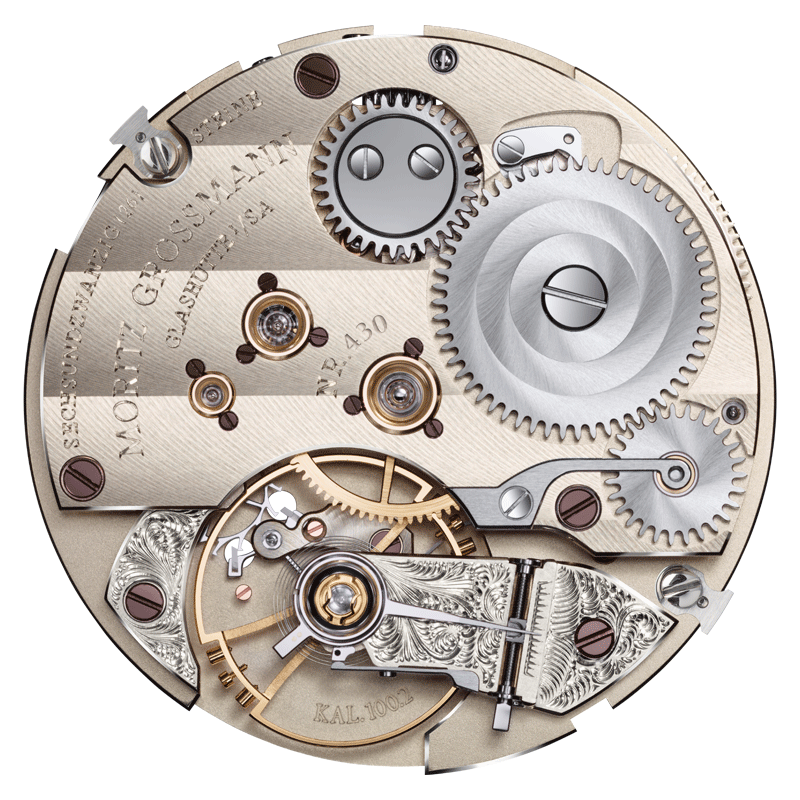 To commemorate the revival of the brand and pay tribute to the inventor, visionary and master craftsman Moritz Grossmann, a traditional version of this wristwatch is now being released. The POWER RESERVE Vintage features a historic dial in argenté echoing Moritz Grossmann’s classic pocket watches. Finely crafted Roman numerals in black and the original logo featuring the ‘M. GROSSMANN’ typography from 1875 grace the dial paying tribute to the master, as he was respectfully called in Glashütte.

The ENAMEL ARABIC is a rare luxurious dress watch just launched for fans of cool steel cases. The BENU series marks the beginning of a new era for the Moritz Grossmann brand. It embodies the DNA of the Glashütte manufacture: schönstes deutsches Handwerk. 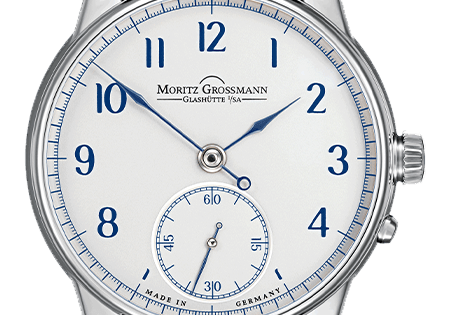 The enamel dial is one of the hallmarks of sublime artisanship that is appreciated by connoisseurs of pure colour and praised for its unique sheen. The sublime face of the ENAMEL ARABIC features a crisp minute scale and elegant Arabic numerals. It expresses its personality with two colour variations on a white enamel dial: the scales and numerals are black or blue, combined with hands annealed to a brown-violet hue.