Robert Greubel and Stephen Forsey have shown creative daring and boldness in uniting their second Fundamental Invention, the Quadruple Tourbillon, with their ground breaking interpretation of the GMT with its outsized rotating globe. Displaying three time zones along with a universal time function, this exceptional timepiece is distinguished by its three-dimensional architecture created with extreme attention to fine craftsmanship. A Unique edition of 66 pieces in total, the first 11 of which are in white gold.

Huygen’s invention of the hairspring in 1675 was a milestone in the watchmakers’ long-running quest for precision. It did not however eliminate the issue of gravity, which is detrimental to the timing of watches, particularly in vertical positions. To seek to remedy this, Abraham-Louis Breguet (1747-1823) conceived the idea of housing the regulating organ (hairspring, balance wheel and escapement) within a rotating cage. By turning around its axis, generally in one minute, the cage carried the ‘heart’ of the watch through different successive positions, thereby averaging out timing variations. The tourbillon was born (1801). Striving to improve chronometry still further, Robert Greubel and Stephen Forsey reimagined the tourbillon principle and then developed their first three Fundamental Inventions: the Double Tourbillon 30° (2004), the Quadruple Tourbillon (2005) and the Tourbillon 24 Secondes (2006). In their GMT Quadruple Tourbillon, the two watchmakers have chosen to revisit their second invention and to take it even further by combining it with a multiple time-zone display. This is a nod to both history and technology, since the ingenious device created to compensate for the effects of gravity… actually gravitates around the Earth – four times over! 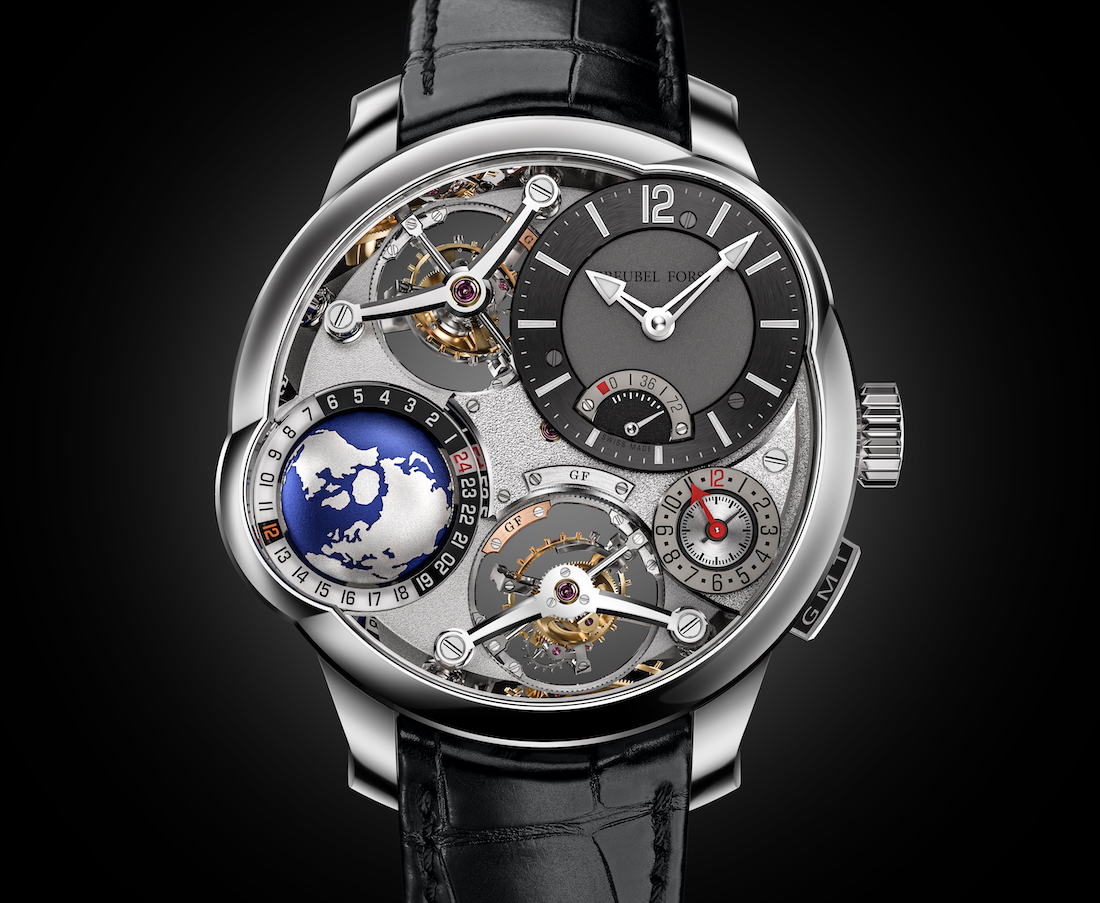 Working on the principle that the more different positions the regulating organ moves through, the more precise the timekeeping will be, Robert Greubel and Stephen Forsey invented the Quadruple Tourbillon with a spherical differential. Right from the original idea the concept was clear. While coupling four separate tourbillons would have been challenging, they sought a more compact solution. To save space in all three dimensions, they chose to construct the tourbillons in pairs within a unique system of compact cages, an extremely challenging feat. Each of these two systems is modelled on the Double Tourbillon 30°, with a first cage rotating in one minute and angled at 30°, fitted inside a second upright cage performing a full rotation in four minutes. The combination of the inclination of the inner cage and the different rotational speeds of the two cages focuses on cancelling out the timing variations due to the earth’s gravitational attraction in all the usual positions a wristwatch can adopt, particularly in stable positions. The spherical differential serves to average the timing of the two autonomous oscillators and thus improve chronometric performance, a system for which two patents have been filed.

Bringing the planet to the wrist

Having mastered the tourbillon, Robert Greubel and Stephen Forsey have continued to investigate and reinterpret other horological mechanisms, notably a practical and much appreciated complication: simultaneous multiple time zones display. In 2011, the two Inventor Watchmakers expressed their own vision of this modern day function in the ground breaking timepiece aptly named the GMT, more recently joined by the GMT Earth. In this patented system, the second time zone indication on a separate subdial is paired with a universal time display providing an intuitive reading of the time around the world thanks to a world first: an outsized globe completing one full rotation every 24 hours, following planet Earth itself.

In bringing the Quadruple Tourbillon and the GMT mechanisms together, Greubel Forsey not only accomplished a major technical feat that led to the creation of a new hand-wound calibre comprising 705 parts, including three fast-rotating barrels. The Inventor Watchmakers also tackled this challenge from an architectural angle to create a timepiece in which the three-dimensional approach is expressed on many levels. The main hours/minutes dial between 1 and 2 o’clock forms the highest point of the dial, where it is underlined by the subtle asymmetry of the case and complemented by a 72-hour chronometric power-reserve display. The next level is it at 4 o’clock, with the coaxial small seconds and second time zone display which is adjustable in one-hour increments by means of a pusher. Located between 8 and 9 o’clock, observers can admire the spectacular sight of the Earth in motion, surrounded by a fixed 24 hours ring around the Equator and displaying local time for all the longitudes – simultaneously taking account of the day/night indicator (on respectively light/dark zones).
A lateral window in the asymmetrical section of the case provides an unprecedented view of the Equator and the Southern hemisphere. The four tourbillons gravitate in two pairs on either side of the blue planet, each featuring an open and transparent construction, secured by flat black polished bridges and adorned with gold chatons as well as hand-polished bevelling and countersinks. A truly enchanting and exquisitely light choreography. 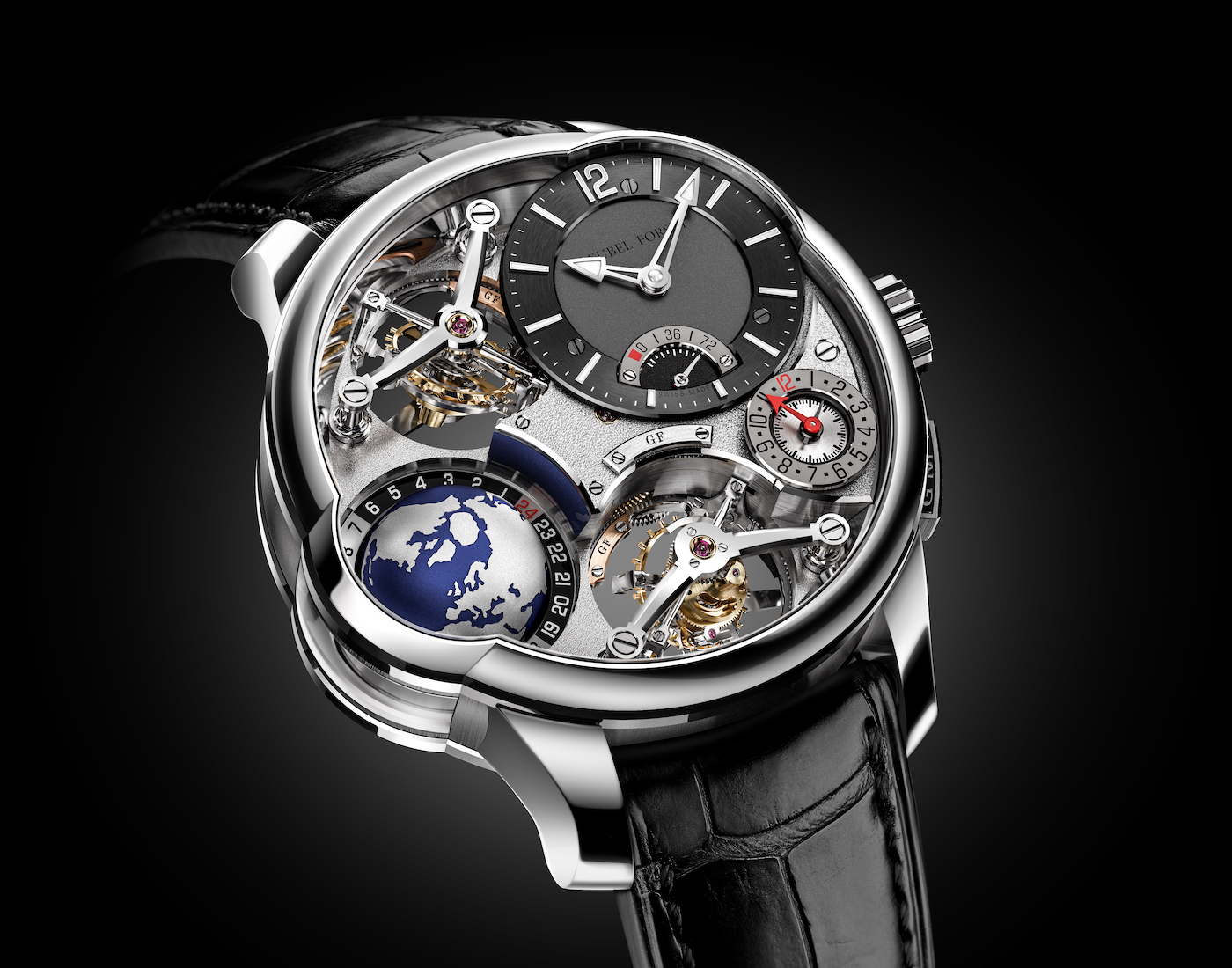